What is your Biological Age?

Not everyone ages at the same rate1. The aging process is associated with a number of physiological and cellular changes2, not all of which are directly correlated with the number of birthdays you’ve had. Your biological age can be distinct from your chronological age, and some scientists believe that it may be a better indicator of your overall health than the year on your birth certificate.

Traditionally, scientists have measured biological age by taking a sampling of 150 of a person’s genes, which together make up the individual’s “gene signature.” But now, researchers at at Uppsala University in Sweden3 have developed a simple blood test that they say can reveal the body’s biological age.

“Most of us have all had the experience of being surprised to find out that someone is far younger than we had imagined — for instance, when an individual we thought was in their late 50s turns out to actually be in their mid-40s,” Denver physician and integrative medicine specialist Dr. Terry Grossman wrote for Everyday Health5 in 2009. “And, by the same token, we will occasionally discover that someone is considerably older than we had guessed. The reason for these discrepancies is often because their biological ages are different than their chronological ages.”

Doctors may one day use the blood test developed in Sweden to determine how various lifestyle factors — including diet, exercise and stress levels — either accelerate or slow down a person’s rate of cellular aging.

For the study, the researchers took blood samples from 976 participants between the ages of 20 and 50 years old, analyzing 77 different plasma proteins in the blood. The participants also answered questions about their lifestyle habits, including smoking, exercise, body mass index and consumption of coffee, soda and fatty fish.

Using the protein profile analysis, the researchers were able to accurately estimate not only biological age, but also height, weight and hip circumference.

The protein profiles also revealed how different lifestyle factors affect the body’s rate of aging. The researchers found smoking and drinking soda to increase biological age by between two and six years, while exercise and moderate consumption of fatty fish and coffee slowed the aging process by the same amount.

How does it work? Diet, exercise, stress and smoking affect a range of physiological processes — such as the shortening of telomeres, the protective caps on the ends of DNA chromosomes — which in turn affect the body’s aging rate and risk of chronic disease.

If the findings are confirmed, doctors will be able to use plasma protein profiles not only to predict a person’s biological age but also to identify how their lifestyle choices contribute to aging.

Using these blood tests could help doctors motivate their patients to stick to treatment protocols that include lifestyle changes. If patients can see how their habits are directly tied to their health and longevity, they may be more inclined to follow new protocols and measure the effects of any lifestyle changes.

“Patients at risk for common lifestyle related non-communicable diseases such as high blood pressure or other types of cardiovascular disease could have their biological age calculated before making changes to their lifestyle,” Dr. Stefan Enroth, a professor of immunology, genetics and pathology at the university and one of the study’s authors, told The Huffington Post in an email. “This could then be repeated and hopefully a lowered biological age would inspire the patient to continue with the lifestyle changes.”

With further research, the test could also be useful for early prediction of Alzheimer’s risk4, as accelerated biological aging has been strongly linked with cognitive decline.

These findings were published online Dec. 1 in the journal Scientific Reports in an article called “Protein profiling reveals consequences of lifestyle choices on predicted biological aging“. 6

I am the principal in a wellness organisation called "Flower of Light" whose mission is to improve our clients health and well-being. I look forward to the grateful opportunity to work with you on your own specific goals. Give our office a call today, and we can set up an appointment for you to experience our amazing technology in real time and to further your understanding of how we can assist you.
All Posts »
PrevPreviousFuel of Life
NextEffects of Drinking Hydrogen Water on Muscle FatigueNext

Urey’s mentor Gilbert N. Lewis, professor of chemistry at Berkeley, was the ﬁrst to create pure heavy water via electrolysis

What is the link between Cancer and Deuterium?

This post is taken from an interview of Dr. Somlyai by Kriben Govender. Dr. Gabor Somlyai graduated as a microbiologist 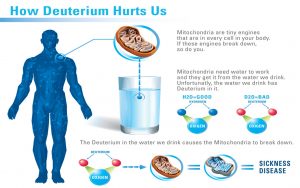 How Deuterium Hurts Us

Previous Next Could the very water you drink be making you sick? Deuterium. This may be the first you’ve heard